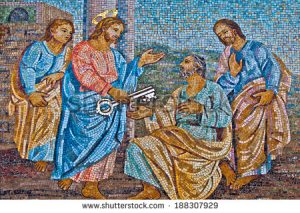 This Gospel is an explanation of the death of Peter after he became a shepherded in the image of the Good Shepherd. Peter has been transformed by the Grace of Jesus to love abundantly. As Jesus loved the father, so Peter loved Jesus, and like him, died on the cross.

Always the topic is that “God so love the World, therefore, He sent his only begotten Son save those who believe in him. This love has realized by Jesus who shed his blood on behalf of his beloved ones.”  The act of love has been revealed through his Resurrection.

This experience is not only to rescue his disciples, but also, is a confirmation of his effective presence among his people. Jesus Confirmed Simon Peter as a Shepherd of the Flock. The story started with the miraculous fishing and ended with the breaking the bread.  This experience became a tradition in Syro Aramaic Church that after the communion of the celebrant, he starts the ordination of the orders in the Church. The Bishop carries out the Heavenly Fire, the Eucharist to put it on the head of the Candidate to receive the Holy Spirit.

There are different meanings of this experience one of them is the condition to be a leader in the Church is having the love of God.

The love of God that means trust God your life as Jesus did. This love is without condition. For Jesus from the beginning he loved his Father. For Peter, this love was failed before a handmaid who questioned him about Jesus. At that time, Simon had fear after they arrested Jesus. This personal love failed before first difficulty.

After his Resurrection, Jesus surprised his disciples in their seclusion to give them his peace and he breathed his spirit. Immediately, the Lord expelled fear from their hearts and he gave them the Spirit of Love and fortitude. Therefore, Peter became sincere, when Jesus asked Simon do you love me more than these.

After that moment, this love transformed Peter to become the image of God as a Good Shepherded who will take care of the people of God without condition. He became similar to Jesus who was obedient to the Father. He accepted to be crucified. Accordingly, became a good shepherded and he became the head of the Church.

As Jesus took care of the sinners the poor, the ill and the homeless so Peter imitated Jesus in everything. He accepted to be crucified as sign of love to Jesus and his church.

According to John, the love of God is a gift to those who believe is a sign of that is their life is similar to the life of Jesus.

This love is from God who forgave our humanity. First, it is not, we who loved God, but God loved us first and sent his son to expiate out sins. In our turn, we have to accept his invitation to live with him.

According to John, love is first, the discipleship is second, and the result is the complete love that is expressed by obedience to the will of God like Jesus to lay down life on behalf of his people.

This gospel is reflecting the ideal leadership that is a service to the household of the Lord. According to John, the requirements of the person are not human skills and the person is talented first. First is the complete love that is coming from God. In addition, sign of the perfection is the fortitude; this is a gift of the Holy Spirit. Jesus gave it to the disciples after his resurrection. Wherever there is fear, the love is uncompleted. Vice versa, the completed love expels it. Most of the time, the leadership is struggling to be successful. For one reason, it failed because the uncompleted love.

The Lord of resurrection came to rescue his disciples by expelling fear from their hearts and establish in their hearts the Love of God that is the Holy Spirit.

Sunday Liturgy, Korbono, Alkedas is commemorating the death and the resurrection of the Lord. With his presence, he expels fear from our hearts and pours in them his complete love. With that in the bottom of our hearts, there is a voice saying, “you are my beloved one”, or do you love me. It is necessary to spent few time to listen to this voice to renew our vows, to restore our relationship and our leaderships. As pastors so as husbands, wives, and leaders,

The anxieties are enormous and the man would be exhausted, like the disciples of Jesus.

Sunday Liturgy is living in the presence of Jesus who came to rescue his disciples and confirm Peter as a shepherd. In our turn, we renew our faith and our love to Jesus. It is necessary to renew our responsibility.

The recent visit of Pope Benedict XVI offers many opportunities for renewal for the Church in the United States. With regards to young people discerning their place in the Church and their role for the future, the Pope’s visit could very well be a defining moment for some who may be contemplating ordained ministry or consecrated life.

In recent surveys of men ordained each year in the U.S., we learned that 20% attended World Youth Day in which contact with the Successor of Saint Peter offers a powerful impact on those thinking about a priestly or religious vocation.

On Saturday, April 19, 2008, Pope Benedict met with seminarians and young people at Saint Joseph Seminary, Dunwoody, New York. He began his address by calling them to be fervent disciples of Jesus Christ. Continuing with this theme throughout his address, he offered vivid and powerful words, “Let your imaginations soar freely along the limitless expanse of the horizons of Christian discipleship.”

To encourage these young people to consider the possibilities of Christian discipleship, six men and women from our Catholic tradition were upheld as models. Those identified during the rally were: Saint Elizabeth Ann Seton, Saint Frances Xavier Cabrini, Saint John Neumann, Blessed Kateri Tekakwitha, Venerable Pierre Toussaint, and Padre Felix Varela. In reference to them, the Pope said, “…any one of us could be among them, for there is no stereotype to this group, no single mold. Yet a closer look reveals that there are common elements. Inflamed with the love of Jesus, their lives became remarkable journeys of hope.”

It was evident that the crowd possessed the love of Jesus and a desire to encounter the Vicar of Christ. Also evident was the affection between the Holy Father and the young people. He offered a personal note of his own struggles to follow the Lord. He said, “My own years as a teenager were marred by a sinister regime that thought it had all the answers….”

The Holy Father also asked those gathered to learn more about the today’s priests and religious. He asked them, “Do not be shy to speak with Religious Brothers, Sisters or Priests about the charisma and spirituality of their Congregation.” In this way, Pope Benedict asked them to talk to priests and religious so that those who are ordained and consecrated could help mentor young people in discerning God does will.

Through his words and through his personal encounter with youth representatives, the Holy Father demonstrated his affection, hope and support for them. He said to the young crowd, “Have courage! You too can make your life a gift of self for the love of the Lord Jesus and, in him, of every member of the human family.”

The Mass earlier in the day included the reading from the Acts of the Apostles that speaks of the descent of the Holy Spirit upon the disciples at Pentecost. That same Spirit was present when they met with the Vicar of Christ. “What is God whispering to you? … Embrace it with joy. You are Christ’s disciples today.”
These beautiful girls and handsome boys came the first time to receive from Jesus the first precious pearl; the nutrition of the beloved ones. They come with gratitude and they do not know how to express their love to Jesus. For sure the Lord already, asked them as he asked Peter. Also we remember how Thomas was amazed and surprised to see with his eyes the all-powerful Jesus who was crucified is standing before him. Instead to say: “I love you Jesus “he said my Lord and my God.”

Today Peter instead to say to Jesus that  leave me alone, that I am a sinful man, he remained next to him to transform the sinful man to the image of Jesus himself. He was reclining at his table receive his food.  He says “I love you, I love you, I love you” and Jesus took away his fear of sin from his heart, because, Peter started to understand the meaning of washing the feet, is related to total purification from his inequities on the cross. He pulled out fear and put his peace after the resurrection. When Peter heard that the man at the seashore was the Lord immediately he goes in swimming to see him.

As the American says:”After the meal there was a deal”

Peter has been inaugurated in his leadership the price of his glory is similar to the price that Jesus paid on the Cross.  John would remain with his brothers longer to confirm them in their faith. Practically m we would find a lot of apologetic texts. There are many things such as Confirmation of the death of Jesus, confirmation of the identity of Jesus and the mission of Saint John as forerunner of the Lamb of God. The other disciples, instead to be occupied to raise their families, they imitated Jesus by leaving their jobs to proclaim the Good News all over the world.

Today , ten young children are approaching the first time to receive  from Jesus  the bread of life and in them , this special food will be transformed  the a consuming fire and confirm them to live in the presence of the living God. They will grow “in wisdom and age and favor before God and man.”

I would like to talk to you parent. This is not a poem this is clear word to you who are in charge of the children like Mary and Joseph, do not demur the spiritual growth movement of your children, who received first time, Communion. I would like to see them every Sunday. I feel that their tendency to come to receive from Jesus their precious gift.  Most of the time the parent , because of their selfishness , refuse to encourage their children to be close to Jesus because they  are busy to do something else more importance to pilgrim to the Church where the children enjoy the presence of Jesus .  For my personal experience as priest, those who are close to the Church are more advanced in wisdom before people and God.